With the recent Memorial Day holiday, I’ve been thinking about heading back out to the local cemeteries to get some more photographs. The last few weeks have been very rainy, so hopefully we’re due for some nice days soon! So in that vein, for today’s Tuesday’s Tip (a prompt suggested by members of Geneabloggers), I thought I would post some suggestions regarding tombstone photographs.

My goal with tombstone photography is to try to get the best photos that I can without introducing anything that may possibly cause damage to the tombstone. So I don’t bring chalk or shaving cream or anything like that. (Although, in one case, I did pour a little of my drinking water on the stone to try to bring out the very worn inscription.) I also don’t really like to carry around lots of photographic equipment (including my DSLR), so typically I just use a digital point and shoot camera. Mine is a couple of years old. It’s 7 megapixels with a 5x optical zoom.

In looking over the photos I taken, I would have to say that I tend to get the best results in mid-morning and mid-afternoon. I’ve found that these times have the least amount of glare and shadows. I have also found that I can pull out better details on slightly cloudy days versus very bright sunny ones. And I also try to avoid using flash because of the glare, but depending on the amount of shade, it sometimes can’t be helped.

Since my camera has a lot of megapixels, I don’t really take a lot of tight-in closeups, but I try to take stand back a bit to get the context — so that I can see adjacent graves. This really helps sort out family members, especially in the case of photographing tombstones of people with common surnames. And because of the high megapixels, I can crop out the individual tombstones and still have good quality images to upload to sties like findagrave. Also, by capturing some of the adjacent tombstones in the image (or just taking a few extra pictures of the area) you just may find that the next plot over is an married daughter and her husband or family!

One of the things I haven’t done previously, but plan to do next time I’m out photographing a cemetery, is to bring along my hand-held GPS and put it in the photograph with the gravestone . I probably won’t do this for every tombstone, but maybe for some of my closer relatives and direct ancestors. That way if I ever need to go back for any reason, I’ll have the lat-long location of the grave to within a few feet. Of course, this will require closeup photos in order to be able to read the coordinates on the GPS unit.

Another tip is that when I first drive up to a cemetery, I usually try to get a photograph of the sign – or the church sign if the cemetery is attached to a church. This way I know in which cemetery the photographs were taken, particularly if I am visiting more than one that day.

Oh, and one last tip. Bring extra batteries if possible and also make sure you’ve cleaned off your memory card so that you have enough free space. There’s nothing worse that getting three quarters of the way through the cemetery and having your camera batteries die. Unfortunately, since my camera uses a non-standard rechargeable battery (and I don’t own a spare) this has happened to me more that once!!!

Well, I guess that’s about it for now — just a few suggestions for cemetery photographs. If you have any others, feel free to leave a comment!

Today’s Friday’s Find is a website that I was lucky enough to first come across several years ago. It is an amazing resource for anyone with Pennsylvania German (more commonly called Pennsylvania Dutch) ancestors and relatives. It is Charles F. Kerchner’s website and the home page can be found here.

In addition to listing common naming patterns for both males and females, the naming conventions page does a great job of explaining the concept of the “baptismal name.” This is why you may run across a family with sons named something like Johan George, Johan Adam, Johan Philip, etc. The Johan part is the saint (or baptismal) name. These men would have commonly been known as George, Adam and Philip – and these are the names you need to look for in civil records. In fact, Johan and Johann are almost always baptismal names whereas Johannes would be the form used if the child was to go by John. Kerchner also discusses on this same page the feminine suffix of “in,” use of the terms Jr, Sr and cousin, and more. If you are researching Pennsylvania Germans, you really need to read this page and bookmark it (or save it to your tool box or resource list).

The nickname page has also been a great help to me with my personal research. The one in particular is Rebecca as a nickname for Margaret. (Or is it vice versa?) Not only is this one not obvious, but it leaves me scratching my head as to how they (the 18th century Germans, that is) ever came up with it. But it has gone a long way in explaining some of the families I’ve been researching. Without this information I would not have known that the baby girl baptized as Margaret was the same person as the daughter named Rebecca in the will. It also helped explain why baptismal records for the children of Henry and Margaret were interspersed with records for those of Henry and Rebecca. (I had previously thought that there were either 2 Henrys or that Henry was a bigamist!)

Anyway, the website of Charles Kerchner is today’s Friday’s Find. I hope you’ll check it out and that some of you find it as useful as I did!

I’m a little late in getting this out, but I just wanted to thank Geneabloggers (and especially Gini) for profiling me in the “Let Me Introduce You” posting on Monday. I was so surprised and thrilled when Gini contacted me about this and I think she did an amazing job with the article.

I would definitely encourage anyone blogging about genealogy-related topics to join the Geneabloggers community if they have not already done so!

It time for another Thriller Thursday, a prompt suggested by members of Geneabloggers. This week’s post is about the explosion of the Carver bakery that rocked Boyertown, Pennsylvania back in February of 1902.

It was just before 11 o’clock on the evening of February 3, 1902 when flames were spotted by the bakers working at George Carver’s Bakery on Philadelphia Avenue in Boyertown, Pennsylvania. The building was an L-shaped structure which housed the bakery in the rear and residence of the Carver family in the front. The fire had originated in the basement of the bakery, possibly in an over-heated flue.

As soon as the fire was detected, Friendship Hook and Ladder Company was summoned. The Carver family and the others in the building quickly evacuated, closing all the doors and windows so as not to provide oxygen to the fire. While waiting for the hook and ladder company, they attempted to put out the flames. However, despite their best efforts, the fire continued to spread and had reached the second floor by the time the fire fighters arrived at the scene.

At this point, the flames, which were fast approaching the roof line, were only visible from the rear of the building. So as a crowd gathered out front, the fire fighters focused their efforts and their hoses upon the rear. What no one realized at the time was that pressure was building up inside the closed building. With little or no warning, the  brick front of the building blew out in a deafening roar. The unsuspecting on-lookers were showered with bricks, timbers and other debris.

In addition to the loss of life, damage to the Carver residence was considerable. The residence portion of the building had been built the previous summer at a cost of $4000. The estimated damage was $2500. The rooms on the upper floor were gutted and the sitting room and dining rooms also damaged. The store suffered from smoke and water damage. Despite the damage, George did rebuild and continued with the bakery business.

While my main connection to this tragedy is to the Shaners. I also have ties to the Carvers. George Carver and his wife Rosa Dellicker were the parents of two sons. The elder son was Newton D. Carver. Ironically, he was born in 1888 and was about the same age as Lawrence Shaner and Irvin Hough, the two boys who died in the bakery explosion. In 1908 Newton married Susan Burdan, daughter of Henry S. Burdan and Catharine Bryan. Susan was my 4th cousin, twice removed. Coincidently, Newton and Susan named their first child Lawrence.

As for the Shaners, Henry S. Shaner was my 3rd cousin, 3 times removed. He was the sexton of Fairview Cemetery. His wife was Amanda F. Renninger. A very sad post script to this story is that Amanda and two of her remaining children, Paul and Charles, died in the Boyertown Opera House fire about six years later in January 1908.  And in November 1910 Edgar, who survived the opera house fire and was the last remaining child of Henry and Amanda, died of “lung affection.”  Though Edgar was only 17 years old when he died, he fathered a child named Catherine. Unfortunately she died of membraneous croup in 1915 at the of 5. Catherine was the only grandchild and the last member of the ill-fated family of Henry and Amanda Shaner.

If you have any connections to these families I would love to hear from you.

Another posting for the Wordless Wednesday prompt suggested by members of Geneabloggers. 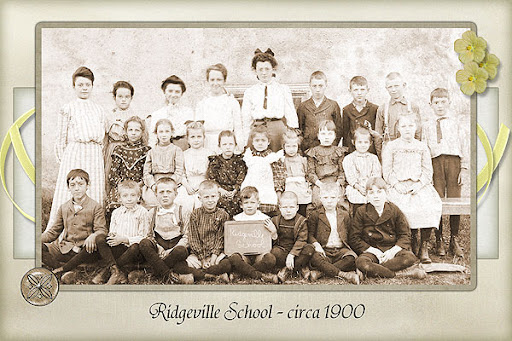 Credits: Students of Ridgeville School circa 1900 (located near Brownback’s Church in Chester County, Pennsylvania); my grandfather is first row, 2nd from the left; scrapbook kit is one of my own.