This is the second in the series of Geneablogger’s Advent Calendar prompts – Holiday Foods.

When I was growing up, the majority of our Christmas (and other holiday) meals were held at my maternal Grandmother’s house and included a large group of cousins, aunts, uncles and other relatives and “adopted” family.  There was no alternating between my Dad’s family and my Mom’s. For us it was always my Mom’s. My father was the youngest of three boys. His mother passed away several years before my parents were married. One of his brothers moved out of state and the other lived about 30 minutes away. My paternal grandfather lived with us but had a long-time girlfriend and spent most holidays with her. And so our family always celebrated with the Garner clan. This was very convenient since usually meals were held at my grandmother’s house and she only lived about a block away from us.

My grandmother loved to cook and so she was really in her element come the holidays. Her maiden name was Evans, and she was very proud of her Welsh heritage… But when I started researching our family history I discovered that in reality she had a lot more Pennsylvania Dutch than Welsh in her blood. Her Evans ancestors immigrated to Pennsylvania about 1698 and spent the next 200 years intermarrying with women of  German (Pennsylvania Dutch) ancestry. Actually, my grandmother’s Pennsylvania Dutch roots should have been obvious given the type of food she prepared – not just at holidays, but throughout the year.

Getting back to Christmas dinner. This meal was always a sit down affair for between 20 and 30 people, served at the noon hour. The number of people varied since, unlike us, some of my mom’s six siblings did on occasion spend the holidays with their in-laws. My Grandmother’s large rectangular table was expanded to its capacity with its 3 extra boards. Then it was pushed to the side so that another long folding table could be set up next to it. Yes, we all somehow managed to squeeze into her dining room! It was tight, so luckily most of us were fairly thin back then – LOL!

There was always enough food to feed a small army. The staples were turkey, potato filling (regular and oyster filling), sweet potatoes and corn. There were at least two or three other vegetables too, but they tended to vary from year to year. Then there were the side dishes of cranberry sauce, homemade apple sauce, chow-chow and  others that I was never brave enough to try! And according to one of my aunts, a meal was never complete without bread or rolls, so one or the other or both were included too!

After dinner there was a waiting period before dessert was served. As another aunt put it, this was to “let the grease settle.” Dessert was an assortment of cakes and pies. There was always a pumpkin pie as well as pumpkin custard. My one uncle married a woman who was an only child and they had no children of their own. So my aunt’s parents, the Jacksons, always celebrated with us. Mrs. Jackson’s specialty was walnut cake and she would bring that each year. We also had mince meat pie – another dish that I was never brave enough to try!

I looked for a photo of a family meal at my grandmothers, but couldn’t find any. :{  So as the next best thing, I am including one taken at the home of my aunt and uncle. I believe the year was 1967, and we are all at one super-long table set up in their living room.  I noticed that several families were missing that year, which probably explains why they were able to convince my grandmother to let someone else host. She is wearing her apron, however, so she apparently was still really involved in the food preparation! 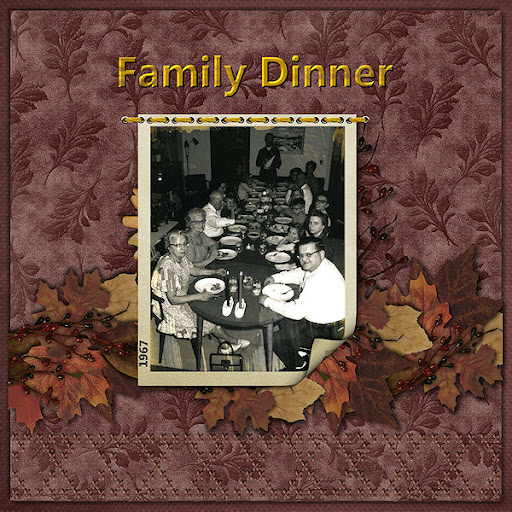 I decided to join in on the Geneablogger Advent Calendar prompts this year. This first post is about the Christmas Trees we had when I was growing up.

Christmas was a very special time of year for our family. My Mom would always start baking cookies and decorating the house shortly after Thanksgiving. But not the Christmas tree. Santa always brought our Christmas tree. I think this made Christmas morning all the more special. The three of us kids would wake up and as we walked down the stairs we would see the tree, as well as all the beautifully wrapped presents, for the first time! Talk about excited!

When I was really young we always had a “real” tree. I’m really not sure how my parents managed to pull this off. I don’t think that they waited until Christmas Eve to buy the tree, but we never saw it sitting outside the house. I suspect they bought it a couple of days in advance and that my Aunt and Uncle would bring it to our house Christmas Eve after we children were put to bed. Much later I learned that my Aunt and Uncle would come over to our house each year to help decorate the tree. 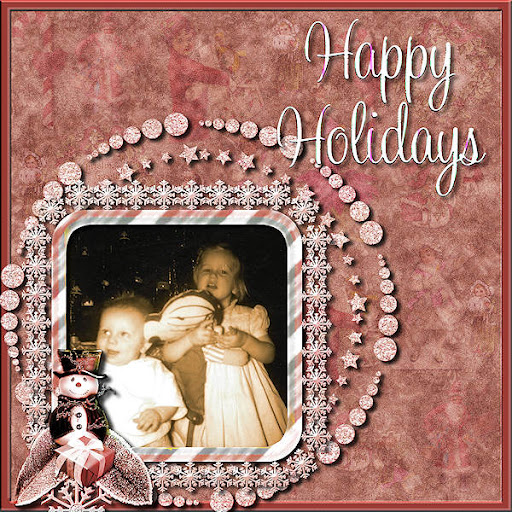 My Brother and I one Christmas Day - you can just barely see the tree! Credits: scrapbook kit is Holiday Sugar Cookie by Bubbly Kori with Bling element by DeliciousScraps

I was the oldest of the three children in our family and about the time I stopped believing in Santa and was allow to stay up and join the tree decorating party, we got an artificial tree. This was the type of tree where each branch had to be added individually. Branches of different sizes had different color paint dabs on the wire to match the paint dabs on the holes in the “tree trunk.”  We would “build” the tree starting at the top and continuing down to the bottom, inserting each branch into the trunk.

Then there was the decorating. Lights always were first. We had the type with big, multi-colored bulbs. We had to test each strand and locate and replace any “bad” bulbs. Once that was done, the lights were wrapped around the tree. Then the decorations. We had some store bought balls, but mostly we had hand-made ornaments. Tinsel was always added last — like the icing on a cake!

Once my sister, who was the youngest, stopped believing in Santa, we no longer waited until Christmas Eve to set up the tree. On the positive side, we got to enjoy having the tree up longer and Christmas Eve was much less hectic. But some of the magic of Christmas morning was gone too.

When my husband and I got married, it was several years before we decided to have children. With just the two of us, it didn’t make sense to set up the tree Christmas Eve. Unfortunately, once we had kids we kept with our new tradition of setting up the tree a couple of weeks before Christmas. We didn’t have the extra sets of hands like my parents did – and it was a lot easier to set it up in advance. A part of me regrets that my children didn’t get to experience the same type of thrill Christmas morning that I did, but instead they will have the memories of walking through the Christmas tree farm and selecting the tree and cutting it down. I think each generation needs to find what works best for them!