I spend a fair amount of time searching through old newspapers for obits and other articles of interest on the families I research. While doing this sometimes a bizarre or interesting story catches my eye. An example is the following article, which appeared in the Reading (Pennsylvania) Eagle on Thursday, October 4, 1888. This one speaks for itself!

Five Children in One Year – A Woman Who Causes Her Husband to Repudiate the Name of Washington
Charleston, SC: Mrs. Crane Washington, who, with her husband, lives on the Milton farm, near this city, will densely populate that section in the course of time if she continues contributing to the population as she has in the past year.
Last January she presented Mr. Washington with triplets. The surprised husband at once took steps to change his name. He had heard about Washington being the father of his country, and he didn’t know how much there might be in the name.
He dropped the matter, but last Monday the responsibilities of parentage again developed upon him. This time it was only twins, making a total of five in the past year, with a cold winter ahead of him. The picaninnies are said to be as black as tar and lively as crickets.

Disclaimer: I am not related to this family and have no further information — just posting an interesting article that caught my eye. I just hope this poor woman had relatives or friends to help her out!

Commissioned by King James I in 1604, the King James Version of the Bible is an English language translation by scholars associated with the Church of England. The initial translation was completed in 1611 and over the course of the next 150 years or so it became the dominant version in use by (English-speaking) Protestant churches and their parishioners. It remained dominant until about the mid-20th Century, when newer translations began to emerge and take precedence.

As genealogists and family historians, many of us may have one of more of these on our shelves – or at least wish we did – since quite often the Bible was a valued possession of our ancestors. Many of these old Bibles, excluding the ones I’ve inherited (of course), contain pages recording births, deaths and marriages within the family. As Murphy’s Law would have it, these pages within the Bibles I’ve inherited have been left blank :( .

While not directly relevant to genealogy, I recently came across this posting on the influence of the King James Version of the Bible on the English language on OpenCulture.com [link]. If you’ve got a spare minute or two, the videos attached to the above mentioned post are worth the watch.

I recently made this scrapbook page of my grandmother and three of her older children – Larry, Jeanne and Kenneth. It was taken the in the late fall or early winter of 1929 since my Grandmother is quite obviously pregnant with her next child who was born in January of 1930. The photo was taken in the backyard of my grandparents home on Queen Street in Pottstown, PA. 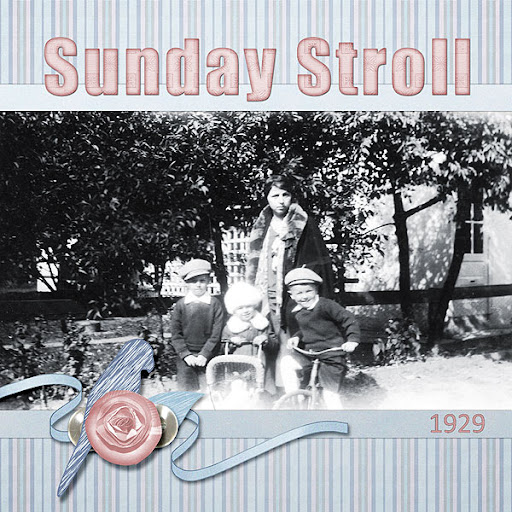 Credits: family photograph; Scrap kit is Just for Fun (one of my own)