Time for a Change

I am in the processing of doing something that I never thought I would do — that is porting my genealogy database to a different software package. After using Legacy Family Tree since 2004, I have decided it’s worth the pain to switch to RootsMagic.

Don’t get me wrong — Legacy is a great program. But lately I have been feeling an ever growing disconnect between the features I want in a genealogy program and what Legacy provides. So I decided it was time to take another look at the competition to see if there was a better fit for me.

The first time that I took a close look at the competition was when Legacy V6 was released without the much anticipated “witness” feature which would have provided for shared events. We (the users) were told that the programmers wanted to include it, but it required too much “restructuring.” At that time I looked at RootsMagic as well as other products. My perception was that RM did not support tagging, and that was a Legacy feature that I did not want to give up. After evaluating the competition,  I decided to stick with Legacy and hope shared events would be addressed in the next release.

Fast-forward about 7 years. Legacy is now on Version 7.5. It still doesn’t support shared events, and, as I blogged about before, it also doesn’t support shared source detail (citations). These 2 pet peeves, coupled with some other minor annoyances, caused me to really give RM a good look when I got the email about their Version 6 release. And the more I looked, the more I liked!

The more I looked into RM’s implementation of shared events – or as they call it, shared facts – the more I decided it was a must-have. First and foremost, this feature allows you to create, for example, a single census event/fact and have it attached to all the members of the household. As a software engineer who specialized in database design, I personally feel this implementation is much better than having multiple copies of the event – as Legacy would have you do. (Or my work-around which was to create the census event as a marriage event and basically ignore attaching it to the children.)

Additionally, shared facts allow for the capturing of relationships beyond spousal and parent/child. For example, a baptismal or christening fact can be shared with the godparents and even the officiating clergy. RM did an excellent job implementing shared facts in a very flexible and powerful way, including user-definable roles and sentence structures.

Sadly, RM does not support shared source citations, but shared facts are a step in the right direction.

And what about tagging – the lack of which stopped me from switching to RM all those years ago? I have found that the named groups give me about 80% of the functionality of tagging — and I can live with that. I am also liking the interface now that I’ve been using it for a couple of weeks.

On the other hand, there are certain things that Legacy has that I miss – like hovering the mouse over a child in the family view to see the spouse list and all the shortcut mouse clicks. But all in all, I think (hope) that I’ve made the right choice – for me, for now.

I am now going through the tedious process of cleaning up – changing the christening facts back to baptism, fixing up the place list, changing the census (family) fact to a shared census fact, etc. And then there’s sources.. That can of worms probably deserves a separate post!

Theresa Lindamood, who designs digital scrapbook kits under the name of Forget-Me-Nots at HeritageScrap, currently has a giveaway on her blog. The prizes are a 6-month subscription to Ancestry (for the US Deluxe Collection) and a copy of FamilyTreeMaker 2012 software. For more information on how to enter check out her blog post [link].

BillionGraves – Great concept if it works…

For a while now I’ve had the BillionGraves app (Version 2.2.2) on my Android – which is an Acer A100 tablet running OS 4.0.3 – better known as ice cream sandwich. Yesterday I finally had the opportunity to test it out at a cemetery. At this point the results are disappointing, but I’m hopeful the problems can be fixed.

My first hint that there may be compatibility issues between my device and the app came when I tried to find and adjust the settings. From reading the BG website and the blog I knew that there were settings within the app to control such things as automatic upload  and automatic deletes. I wanted to see if I could also set where the app would store the photos since I wanted them on my external SD card instead of the internal memory. But tapping the 3 vertical dots icon (which is normally the settings button within an app) doesn’t work – nothing happens, no screen pops ups, nothing. There’s just a short buzzing noise and that’s it.

While disappointed that the settings didn’t work, I decided to plow ahead and see if the photo taking part of the app worked. Once the GPS got an “accurate” reading, I started snapping away. In a short amount of time I had about 175 gravestone photos.

I then went into the photo viewing part of the app. I tried scrolling through the photos. After a couple of swipes the app crashed. (And each and every time I have tried this since, the app has consistently crashed. Every time.) Although I was disappointed that I would not be able to quickly review the photos before uploading, I went ahead and uploaded them anyway. The bulk upload “appeared” to work. On the BG website, I went to MyPhotos and they were there – and they were linked to the correct cemetery. (See screenshot below –  not sure why some were assigned to 8/4/12 when all were taken on 8/3 – at least in my time zone.) 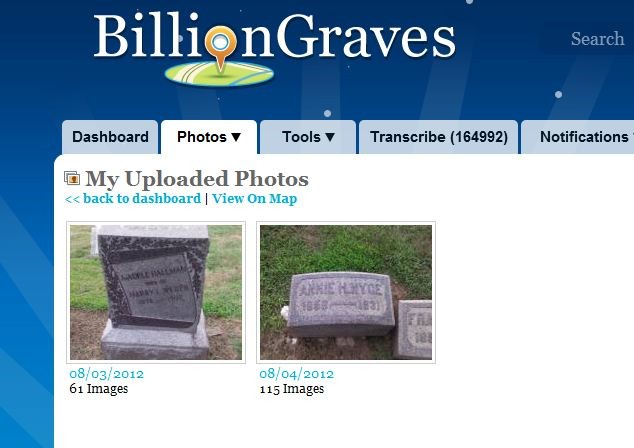 I then started to transcribe a few of them. I wound up adding 29 transcriptions. At this point, I decided to search for one of my newly transcribed records. (I used to be a software developer and I have this irresistible urge to test functionality as I go along.) To my dismay, my newly transcribed record was not  found. Not only that, when I went to the home page for the cemetery, BG says there are 0 tombstone photos! Weirdly, it does have my 29 transcriptions and the photo locations are plotted on the map. (See screenshot below.) I have an email into BG support, but I can only guess that the upload didn’t completely register. 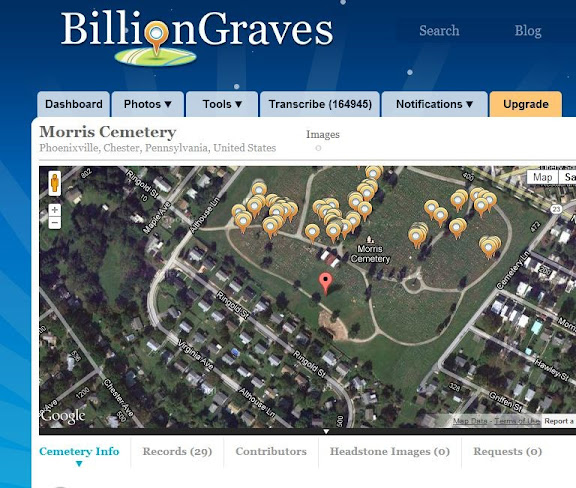 Hopefully this will turn out to be a “minor” problem and will be fixed soon. I am also hoping the folks at BG (or anyone else for that matter) can tell me how to access the images directly on my Android – not via the BG app. I’ve looked in the Gallery as well as searched the file system through ES File Explorer, but can’t seem to find them. Some of the images I would like to be able to save on my computer and attach to people on my family tree. I’ll like BG a whole lot better once these issues are resolved!!

P.S. For further information on BillionGraves, check out their website [link].

UPDATE 1: It’s now been a couple of hours since I published this post and (miraculously) the cemetery photos that I uploaded yesterday are now available on BillionGraves. And as was I writing this update I got an email from BillionGraves support stating that it may take up to 24 hours for uploaded photos to become available – which in this case was spot on in that it has been almost exactly 24 hours since the upload. So I guess I just wasn’t patient enough.

UPDATE 2: Ok, I finally found the settings menu. It is not accessed by the standard three dot icon. It is accessed from a gear icon which only appears on the dashboard screen. I had to tap it repeatedly to get it to work. Sadly, there is no setting to tell the app to store the photos on the external SD card.

CRASH! BANG! That’s the sound of another brick wall breaking down!  Last evening, after clicking send on an email to two cousins who also descend from Thomas Dilliplane and his wife Mary, I went to my GoogleReader and saw the Genea-Musings post from Randy Seaver on a new database available on the FamilySearch.org website [link]. I was absolutely stunned to see that Pennsylvania Probate Records are now online since the email I had just sent was regarding getting a hold of the Berks County, PA estate file of Adam Swavely. We were suspecting that Mary was a daughter of Adam and were hoping that she would be named as such in the file.

Talk about pay dirt – this was the genealogy equivalent of hitting the lottery! Despite the Probate Records being browse-only, it was fairly easy to locate Adam Swavely’s file – all 25 pages! And yes, we now know that Mary Swavely, daughter of Adam and Esther, was indeed the wife of Thomas Dilliplane. (See my previous post on this topic [here].) And as if that wasn’t enough, since Mary died before her father, we also know the names of all of Mary’s children. There were actually twelve — which was a few more than previously identified.

And the best part is that with these probate records now available online  I am positive that additional brick walls and uncertain linkages will be confirmed and sorted out!

If you also have PA ancestors, you are going to love having these records online! Here’s the [link].

Thank you FamilySearch for hosting these records and thank you Randy Seaver for posting about them the first day they went online!

By now I think everyone must know about Find-a-Grave. It’s the go-to site for death/burial data and potentially even biographical information. But suppose the person for which you are searching has no memorial on find-a-grave — yet. If he/she served in the military or was a dependent of a military vet, you may want to try the Nationwide Grave Site Locator hosted by the United States Department of Veteran Affairs [link].

I stumbled upon this site a couple of days ago and found missing death and/or burial information for several people in my genealogy database. I was originally looking for confirmation that my Mom’s cousin was buried in Arlington National Cemetery. After finding him, I ran a few more searches on some of the surnames I search. I was lucky enough to find several more (distant) relatives in various cemeteries throughout the U.S. – especially those who died relatively recently.

According to the Grave Locator website, here’s what you can expect to find: “burial locations of veterans and their family members in VA National Cemeteries, state veterans cemeteries, various other military and Department of Interior cemeteries, and for veterans buried in private cemeteries when the grave is marked with a government grave marker.”

So if you haven’t already, here’s another site to add to your genealogy research tool box.